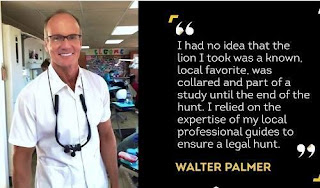 This weekend the world learned that some worthless scumbag had illegally lured Cecil The Lion from a protected reserve in Zimbabwe and shot him. Over the next few days it was reveled that an American dentist had paid $55,000 to two locals that lured the endangered animal from the reserve by dragging a dead animal carcass from the reserve to just outside of the reserve so that the rich American dentist could shoot the animal.

Walter J. Palmer, a dentist in Bloomington, Minnesota shot the endangered lion with a bow and arrow, then spend the next 40 hours tracking the poor injured beast before finally killing it with a gunshot. They then skinned it and hacked it's head off. But only after trying unsuccessfully to cover their tracks by attempting to destroy the animals tracking device.

Luckily for justice, officials found the tracking device and soon arrested the two men that served as "guides" for the dentist. While of course he escaped the country back to America.


This is not the first time that Palmer has been in trouble for murdering an animal that he shouldn't have. He pleaded guilty to a license violation after shooting a black bear in Wisconsin in 2008. At that time he shot the bear in a restricted area. Sound familiar?

So what could drive a wealthy man to to waste $55,000 on killing an animal? Most dentists with that kind of money just buy a Porsche to show that they are having a mid life crisis, but this horrible excuse for a human has to go around the world murdering God's defenseless endangered animals?

There is only one excuse for why someone would do something so disgusting.

That's right. If you look at all of the pictures of this man he is with another man. In the gay culture these people are what's called "butt buddies".

What a disgusting human being.