Port Douglas, Queensland, Australia – Now that Australians are packing up the holiday decorations others are preparing for their next big holiday.

Seven years ago Steve Irwin, Australia’s most famous export died after being struck through the heart with the barb of a sting ray. So enraged by the death, this small town decided to strike back on the mostly harmless, but sometimes deadly Ray. 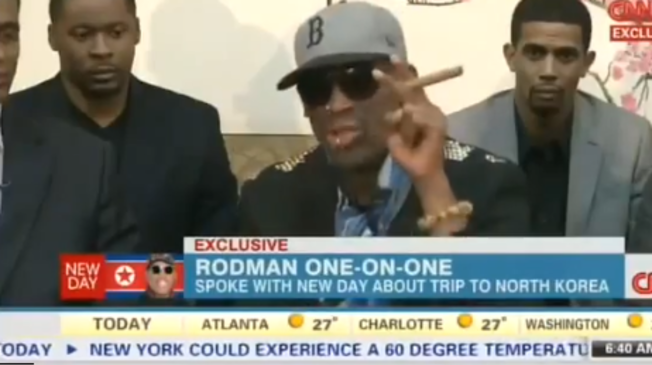 BREAKING NEWS – In an act that is not too surprising, North Korea says that American Basketball star Dennis Rodman has been arrested in Pyongyang, for sedition.

Details are not yet forthcoming, but rumors coming from South Korean News outlets are that Rodman was involved in a verbal exchange with North Korean Leader Kim Jong-Un. The North Korean leader, who many around the world see as a dictator, confronted Rodman on his interview on US news outlet CNN.

Saturday – Police were called to a warehouse in a commercial district in Los Angeles. When they arrived they were shocked by what they found.

Dock workers had reported suspicious events occurring around a shipping container as soon as it entered port. Workers notified the police who then set up surveillance around the container day and night. Finally this Saturday morning at 3:31 AM their net ensnared the guilty party.

Fast Food: Could Your Fish Sandwich Be Radioactive?

In March of 2011, a giant tsunami hit Japan, crippling the Fukishima Nuclear Power Plant. Since that time the nuclear plume has been slowly spreading across the Pacific Ocean, even as tons of irradiated debris has been washing up on the west coast of the united states. Every time this radioactive debris washes up on our shore it carries thousands of radioactive invasive species, which have to be destroyed by special scientists.

So you would think that as an American Consumer you would be safe. But you are not. It has recently come to my attention that several fast food chains could be selling poisonous fish.

Juan Ortiz De Jesus, is a fisherman from California, everyday he wakes up and takes to the sea. He works for a company called Southern Pacific Fisheries (SPF). The company has a fleet of trawler ships that catch thousands of tons of fish a day. This fish haul is then sold to plants that process the fish. From there the fish is divided by quality into lots, with high quality fish being sold to high price restaurants, fish markets and grocery stores. Low quality fish is sold to fast food chains to be further processed into their fast food fair.

It has been confirmed that several East Coast cities experienced the nations first Velveeta Riots this weekend. New York City, and Pittsburgh suffered through relatively tame riots with only minor injuries in one of two grocery stores. But Boston, home of the New England Patriots, had a much larger riot at one local area Shaw’s Supermarket.

Since 1947 our Government has been lying to us about aliens. Everyone sees them, UFOs are everywhere, in every nation. They are a threat to our sovereignty as a nation and as a world.

Now a whole entire airplane has vanished into thin air. Yesterday A Malaysia Airlines flight carrying 239 souls lost contact with air traffic control and disappeared. Known as Flight MH370, it is a B777-200 aircraft heading to Beijing, China from Kuala Lumpur, Malaysia. The Associated Press reports that the flight lost contact somewhere over Vietnam.

For the last year the internet has been on fire with rumors of who will and wont be in the next Star Wars movie. Disney bought the franchise from George Lucas and has been working to get another movie trilogy into theaters. Many of the original cast has signed on to be in the movie.

This week Disney announced that Jar Jar Binks will be in the next movie.

Jar Jar has been the most controversial Star Wars character since Lucas changed the first movie to show Han Solo not shooting first. Binks was a completely CGI figure in the newer trilogy. Many largely looked at the figure as at best a comedy prop showcasing what Lucas could do with CGI, not what he should do with CGI; at worse the character was looked at as a potentially racist figure with a stereotypical sing song African American dialect.

Binks portrayed a lost foolish creature in the first movie that befriended young Anakin Skywalker (aka Darth Vader). In the second movie Binks was elevated to a Galactic Senator and was used as a puppet by Chancellor Palpetine to rest power from the Senate and to Palpatine, who soon turned the Galaxy into his own Empire.

It is such sad news that is coming out of the Ukraine. Today an airplane from Malaysia Airlines was shot down over the Ukraine. Early reports are pointing fingers at the Russians. The piece of land that the plane was destroyed over is pro-Russian held land and just a week ago a Ukrainian military troop transport was shot down, now this plane. It is no doubt that Russia is behind this as they are the only force in the area that could shoot down such a plane.

The plane was flying at 33,000 feet and had taken off from Amsterdam and was flying to Kuala Lumpur. A U.S. official said that a radar system saw a surface-to-air missile system turn on and track an aircraft right before the plane went down, and then a second system saw a heat signature at the time the airliner was hit, the official said.

Cover Up: Aliens Return Missing Airliner, Russia Shoots It Down

The lost plane was soon attributed to hijackers. But no trace was found of the plane. Over 15 separate nations searched for the plane and no trace was ever found by anyone. Many soon realized that there was only one logical explanation. Aliens had abducted the plane.

I recently had a moment to sit down with hit Hollywood director Micheal Bay. Bay is a big commodity in Hollywood now as he is coming off of his big summer hit Transformers 4: Age of Extinction, and is about to release another big summer blockbuster Teenaged Mutant Ninja Turtles (TMNT).

But it was neither movie that he wanted to talk about with us. When I brought up what might be in store for the next installment of Transformers he became an excited Chatty Cathy. “I am so excited about that movie. I am always about my next big hit. Transformers 4 just hit and TMNT is about to hit. But what is foremost in my mind is what I am going to do to Transformers next. I have guys working on the script now and it is almost done. We will start filming in a few months and I am excited” Bay told us.

I asked Bay what surprises might be in store and he had this to say: “We are shaking it up. Big changes. We took some elements from the 80′s movie in this last one and it was a big hit. We made what? $300 million opening weekend? People love it. So we are going to borrow a little more for the the next movie.”