What is a "Whorelot" you may ask. It is a woman that is a Harlot, but with a lot of Whore in her. Whore is not a very nice word. So I say "whorelot". If you are offended by the word then you probably are one. Anyway, here is a list of my greatest articles about whorelots:

I was at the Sunday evening women’s bible study the other night when the topic of pleasing your husband came up. Some of the newly married ladies were curious which sexual positions were ok for a christian woman to engage in with their husband. Soon Talk turned to one position in particular. Since I am the elder of the group many questioning faces turned to me. Of course I have my opinions, but my opinions are nothing to the opinions of God and Jesus Christ. 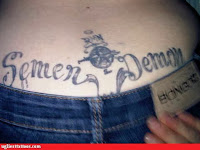 What Your Tramp Stamp Says About You

While researching another article I came across a phenomenon known as Tramp Stamps. It seems that they have been around for a while. Being older, I had never heard of them until just now. For those of you who don’t know, a tramp stamp is code far a tattoo above ones buttocks. It seems that it is a fashion choice now, but originally was considered by many men as a target.

Ready for the Swimsuit Sin Season?

Today I was over at my grandsons apartment when he received a notice about the apartment complex having a pool party to celebrate the opening of the pool.
I urged him not to go as it is almost certain that he will be tempted by the sin treats, of the whorelots there. I listed the different types of scantily clad skanks that will try to coax his sin stick from his swim shorts and into their awaiting moist sin cesspits. I thought that the information was so valuable I would share it with you.